Boston Marathon, you have a special place in my heart. For so many years you were the ultimate dream. I failed on multiple occasions in my quest to run this iconic course. Monday I finished the course for the fifth time. What keeps me coming back? Yes, the tradition and the history, but also because the Boston Marathon = GRIT. PRs aren’t given, they are earned. Don’t be fooled by the net downhill course. The Boston Marathon course is designed to put the odds against you.

The gun goes off and you run 100+ meters downhill in the first mile. Sounds nice huh? That downhill pounding on the quads and pushing of the toes against your shoes comes back to haunt you in the teens. You go up and down the first few miles before evening out until the 15ish. Mile 16 is a major downhill, again trashing your quads as you easily run your fastest mile right before tackling Newton Hills. For 16 miles you’ve been running scared, knowing Newton is approaching. You see the “Welcome to Newton” sign and you get a little nauseous.

Everyone talks about Heartbreak Hill, but what really makes it a heartbreak is that you’ve run 3 hills prior and you’re convinced it’s over and then boom, heartbreak. It’s just a punch in the face. So you conquer the hills. You’re rewarded with another downhill. Sounds nice, but at this point your quads are trashed from the early downhill miles and your hamstrings feel like they’re about to pull from climbing so you’re pumping your arms like crazy and using the crowds of Boston to send you home.

You see the Citgo sign and the Prudential Center and you choke up. You just ran from Hopkinton to Boston. With less than a mile to go you escape the crowds in an underpass, then make the infamous right on Hereford and left on Boylston. That final 800-meter stretch is surreal. For those few minutes you escape reality. You try to soak it all in. For those few minutes you’re not “Principal Lowry” or whatever your day job might be. If I had the writing talent of my Papa or Carmen maybe I’d be able to describe it!

This year I ran a 2:54. A 4 minute course PR and finished 98th woman. I was hoping for top 100 😜 I’m determined to master this course, but I’m not there yet. This year the strategy was a planned positive split. Run hard for the first half, ignore the watch from 17-21, and then give whatever I’ve got for the final 5. The plan served me well as I got the tiniest of PRs. A PR is a PR though and considering I’m a new Mama and ran fewer miles than in past training blocks I’m super excited! Plus it’s BOSTON! It’s no Revel course!

So how did I feel? I ran a little scared. Scared I’d hit the wall. Scared my hamstrings would lock up, scared I wouldn’t be smiling at the top of heartbreak, and the early miles just felt so aggressive. I had a pit stop around mile 16/17 because I didn’t get to use the porta potty before the race (the line was crazy long) and I was really thirsty from the humidity. I remember around mile 17 fantasizing about how easy my life would be if I just gave up marathoning and slept in and went to brunch on Saturday mornings instead of training. I forced myself to ignore those negative thoughts and did my positive self talk. I looked down at my JANES tattoo and thought about my daughter, I told myself I was tough, I thought about Brent and how much he believes in me, and I thought about Mama and Papa and all the cross country meets they took me too and how much I love them. I did a bit of math around mile 24 and knew I’d have to hustle for a PR. Alaina sent me a text that popped up on my watch and it said “Fire up those buns and GO GO GO!” and I just went for it. I busted out a fast final mile and finished in 2:54. I cannot believe I ran 26.2 miles at a 6:37 pace. I feel so grateful and lucky.

I’m getting closer to that ultimate goal of 2:48, 2 hours faster than my first marathon in 2008. But will I ever reach an ultimate goal and feel 100% satisfied?

For now I’m gonna take a bit of a break from high mileage running, but I’ll see you in 2020, Boston.

Jane did such an amazing job on both flights! She’s the best baby! 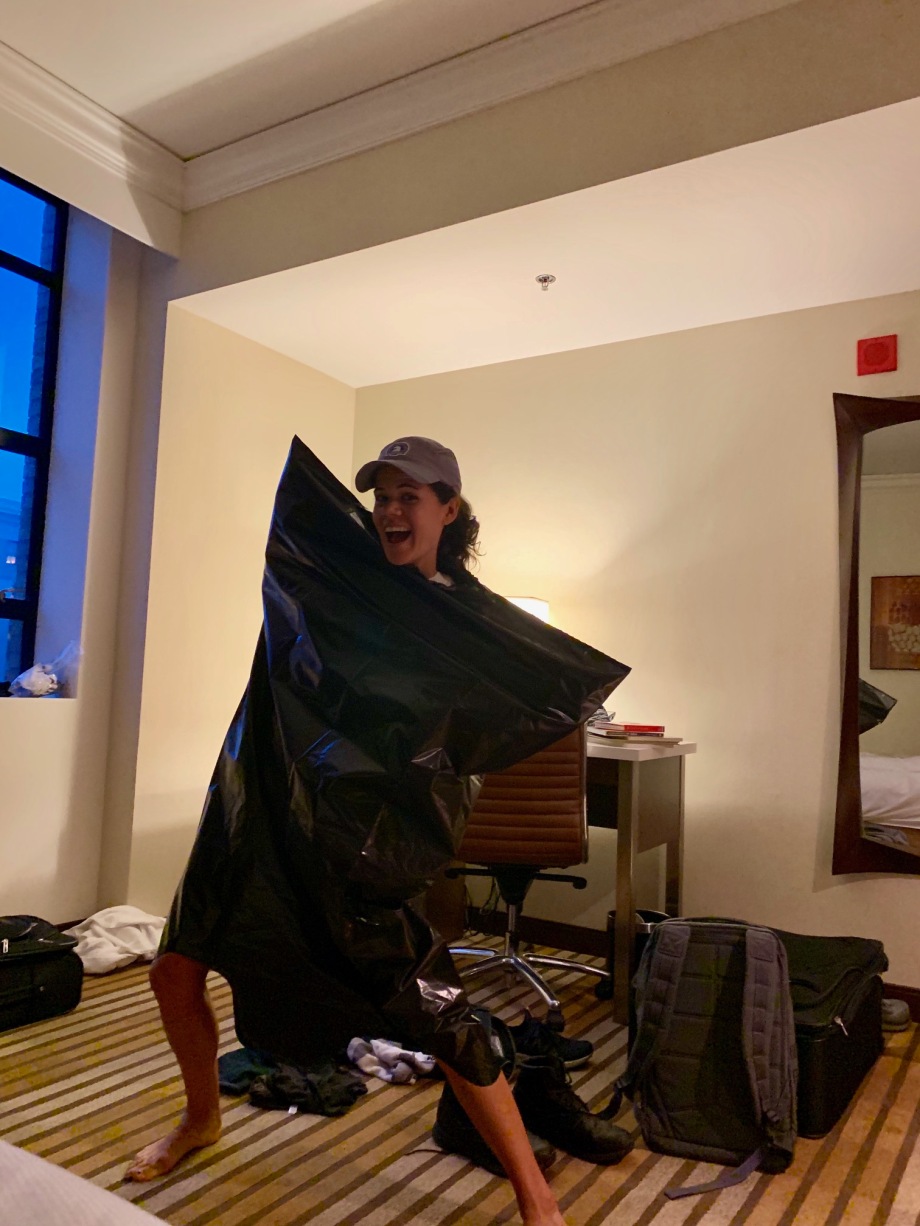 It decided to pour the morning of the race. Thank goodness it stopped by 10am!

Walked to the start with Hungry Runner Girl and Tina Muir! 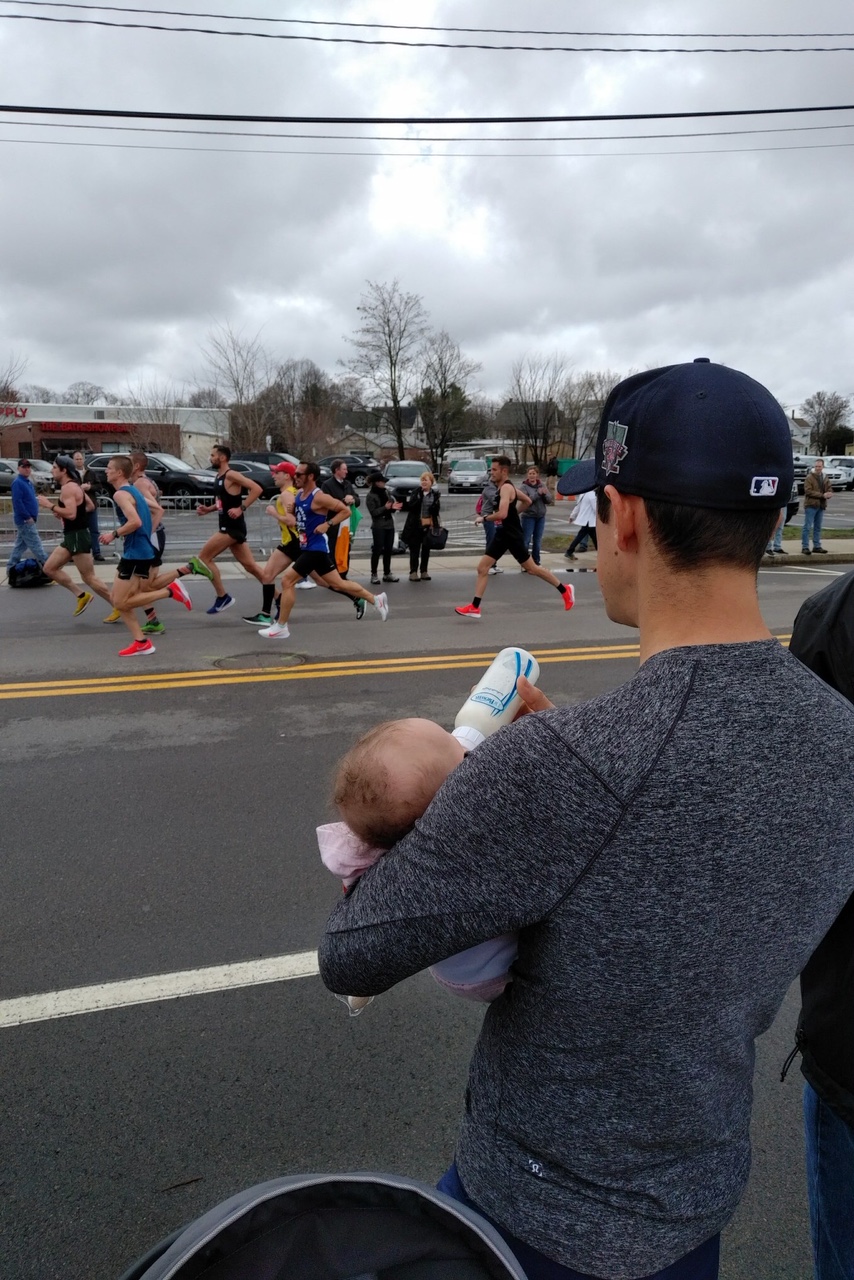 Yup, that’s Blue randomly in my parent’s photo of Jane and Brent! 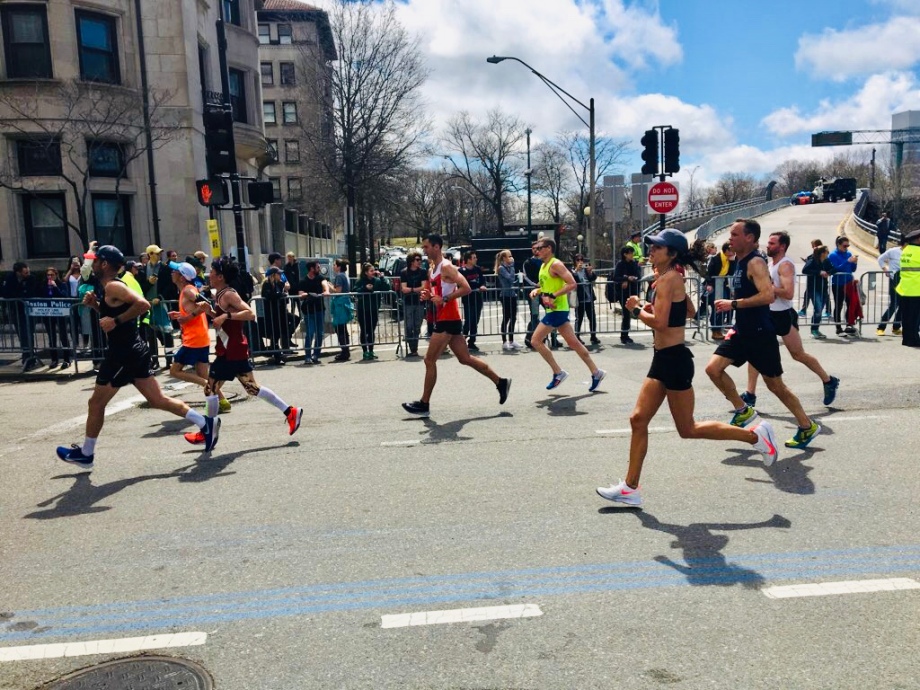 Less than a mile. 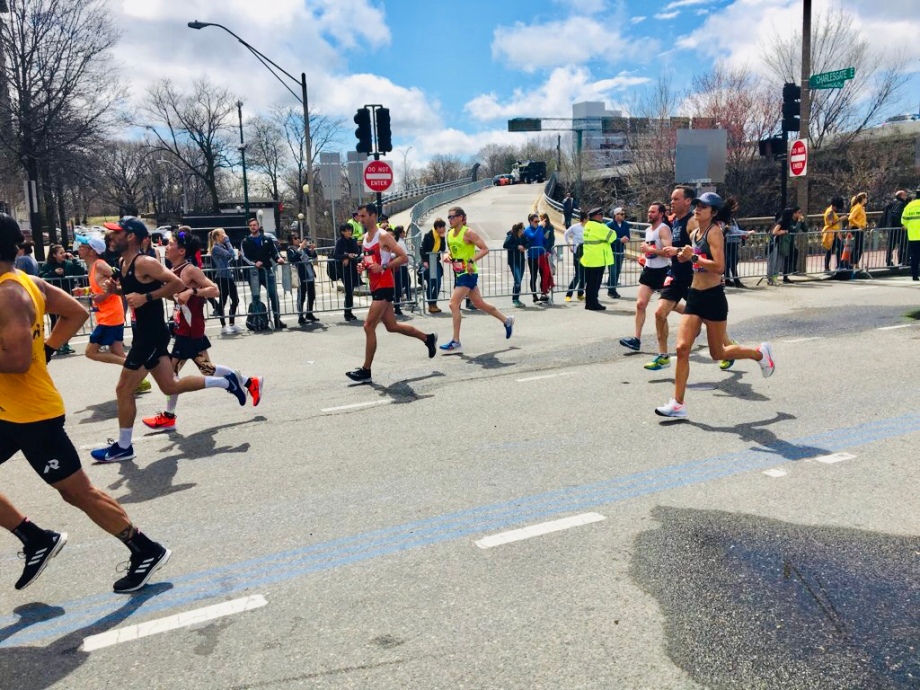