2:55.09. But a number doesn’t tell a story, and Chicago was quite the story. I wouldn’t change the experience, but my 26.2 journey was far from perfect.

Let me rewind to Saturday. Brent, Ellen, and I stayed in Ukrainian Village with Erica (former EQ3 teacher) and woke up to some crazy thunder/lightening. I was worried about the race getting cancelled on Sunday, so I was hoping we’d get the storm out of the way in time for the marathon. After our morning coffee, we hit up the expo. It was so well organized, had plenty of freebies, and didn’t get too crowded.

After splurging on a Myo Buddy Pro, we went to meet my parents at their hotel. They drove down from Michigan for the weekend. They went off to wander on Michigan Avenue, and Brent and Ellen went off to run/rock climb. I took full advantage of their hotel, ordering room service, taking a bath, and watching trash on TLC. We had a super early dinner at Mart Anthony’s, recommended by Alison (current EQ3 teacher). It was authentic and perfect pre-race food.  Because we ate so early, we decided to go get dessert after. I’m thinking this may have not been the best idea before the race, but I honestly think they were worth it. These donuts were deliciously greasy. I have a stomach of steel, and the race isn’t for another 11 hours. I’ll digest all this in time.

I actually slept well Saturday night. The more marathons I do, the more relaxed I feel going into the race. I had my usual bagel PB&J, some coffee. Brent and Ellen drove me to the start. Considering I usually run Boston as my annual marathon, the American Development Tent felt heavenly. Right next to the start, your own porta potties, no gear check (you just leave your stuff at a table) AND we were warming up with the elites. It was such a cool experience. They announced that we’d be walking over to the start, and I had my fuel ready and felt surprisingly calm.

Walking to the American Development Tent

Starting right next to the elites was a surreal experience. They’re announcing Gwen Jorgensen, Mo Farah, Galen Rupp, all RIGHT next to me. I was tempted to jump up and wave at the camera. I felt a bit like a poser. Cristina Lowry shouldn’t be allowed this close to professional runners. Next thing I knew, everyone started running. I don’t remember a count down or a gun. We were off. It startled me!

Chicago satellites are off, so I ran based on feel for the first 5k. I probably averaged about a 6:35 pace. After 5K I locked in at a 6:35-6:40 pace and it just felt so good. I felt like I could run forever. I was pumped, excited to be running with a bunch of guys, felt confident, was repeating my mantras in my mind. I actually never hit a wall during this race. For that I am grateful. I took my first gel at mile 4, and the second at mile 9. At mile 13 right after I saw my parents, I noticed my stomach felt crampy, but I used my mind strategies and focused on how amazing my legs felt. I stayed on pace, running under 6:40 for every mile up until mile 20. I’d dry heave every few minutes, but forced myself to take my mind off my stomach and focus on how lucky I was to be in Chicago, and how hard I’d trained. GROSS DETAILS ALERT. At mile 20 I threw up a little in my mouth and spit it out. As I was spitting it out my watch dinged. 6:43. Damn, if I can run a 6:43 while throwing up, there is no stopping me. Plus, Ellen was out on the course popping out everywhere cheering and screaming like crazy. I know this is stupid, but I wanted to make her proud. She is such a great friend and had come all the way to Chicago to support me. I did wonder if she noticed I wasn’t my usual smiley self. The photo below is a forced smile!

I hit 6:45 or faster from 21-25 (dry heaving every few minutes), then hit the final mile to go and started sprinting. My legs still felt amazing at this point, but I then threw up AGAIN and thought I can’t ruin this now. My last mile was 6:52 which annoyed me. I’m the queen of the negative split!

I turned left towards the finish line and started to tear up. I couldn’t believe I had managed to hit my 2:55 goal on a wonky stomach. I felt so grateful, so proud, and so relieved. Maybe a tad bit annoyed that 2:54 was 9 seconds away, but mostly proud 🙂 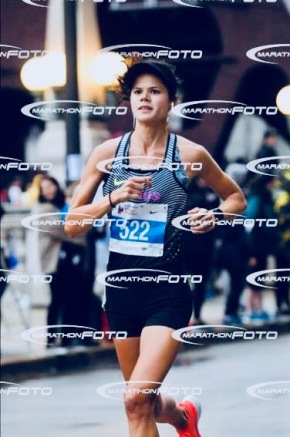 After I crossed the finish line, whatever sugar was left in my stomach came out. I apologized to the people around me who had to witness it while they were trying to celebrate their finishes. One guy gave me a pat on the back and said “Way to put it all out there.” I didn’t care. 2 fricken 55. I’m inching my way closer to cutting 2 hours off my marathon debut of 4:48. I made my way back to the American Development Tent, saw all the amazing text messages of support. I rushed to meet my parents, Brent, and Ellen.

Seeing Mama and Papa at the family reunion site. I love my parents so much 🙂

I’m not sure how to feel about the race. On the one hand, I hit my goal, but I didn’t have the race of my life. Maybe this is all part of the plan? Boston conditions were meh last year. Stomach issues in Chicago. I’ve run marathons in heat. Maybe this is all to teach me grit? One of these days all the stars will align. One day my marathon experience will be magical.